The Aquarius is a big boat for the immigrants rescued at sea. 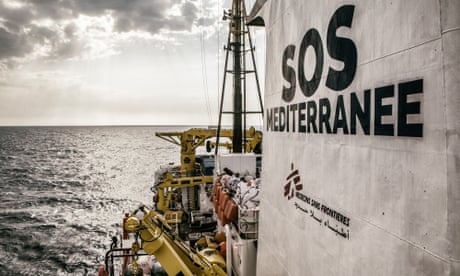 The Aquarius is the last private rescue ship operating in the area used for crossings from Libya to Europe It has been at the center of a row about Europe’s approach to migration since Italy refused to allow it to dock on its shores in June. Last month it spent 19 days docked in the French port of Marseille after Gibraltar revoked its flag. It set sail again last week after first acquiring Panamanian recognition.

The two charities that operate the Aquarius migrant rescue ship in the Mediterranean have urged European governments to step in to secure its future after its Panamanian flag was revoked following alleged pressure from the Italian government.

Médecins Sans Frontières and SOS Méditerranée described the decision by the Panama Maritime Authority to deflag the vessel as “a major blow” to the ship’s humanitarian mission.

They claimed the PMA was forced to revoke the registration after coming under “blatant economic and political pressure from the Italian government”.

Italy’s anti-immigration interior minister, Matteo Salvini, has denied that his government was behind the decision to deflag the Aquarius. Writing on Twitter he claimed he did not know the telephone dialing code for Panama

My reaction about that :

I think we need to help  The minors are aged between 13 and 17 and come from Eritrea, Ghana, Nigeria and Sudan, because they need to have a future.

And we need to help them if they are very sick because we have the resources for that.

But i think all the country must participate.