This Mansion is one of the most beautiful places I’ve ever been to. It is located on the Central Coast of California, United States close to the city, San Simeon. It is well attainable by car and only a four hour drive from Los Angeles and San Francisco.
Hearst Castle’s history begins in 1865, when George Hearst, a California Gold Rush multimillionaire, purchased 40,000 acres of ranchland. His son William Randolph Hearst used to spend his summer holidays camping with his family up on the hills on his father’s ranchland. This had always been his favorite place, so he decided to build his home there at the age of 56. He called his mansion La Cuesta Encantada—Spanish for “Enchanted Hill.” Hearst first approached American architect Julia Morgan with ideas for a new project in April 1915, shortly after he took ownership. Hearst’s original idea was to build a bungalow. His simple instructions to famed San Francisco architect Julia Morgan in 1919 were:

“Miss Morgan, we are tired of camping out in the open at the ranch in San Simeon and I would like to build a little something.”

Between 1919 and 1947 they created a mansion with 165 rooms and 127 acres of gardens, terraces, pools and walkways – an American castle that was destined to become one of the world’s greatest showplaces for his art collection. At the age of ten Hearst toured Europe with his mother. He was inspired by the grandeur and scale of castles, art and history. This experience was one of the major reasons to build this majesty for his own enjoyment.
William Randolph Hearst dominated journalism for nearly a half century. In 1887, William was granted the opportunity to run the publication of his father. William invested heavily in the paper, upgrading the equipment and hiring the most talented writers of the time, including Mark Twain, Ambrose Bierce and Jack London. 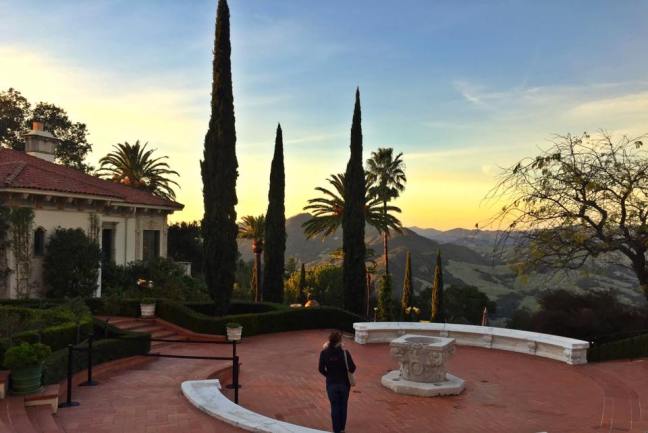 After more than 28 years of construction, he finally enjoyed the times he spent in his castle. He invited famous people from Los Angeles every weekend. He loved to impress his guests during the days with all the entertainment his castle had to offer. He had the largest private zoo to that time, a home theater, tennis courts, etc. Over the years many guests have visited Hearst Castle, such as political leaders, like Winston Churchill, journalists, literary figures and other notables, art experts, as well as people from the entertainment industry, like Charlie Chaplin and Gary Cooper. In the evening he invited all his guests for a big dinner party and he would always sit in the middle of the table. The people who sat closer to him were the people he was most interested in, especially in their conversations. He was very focused on discussions, so people with different kinds of opinions were seated next to each other for Hearst’s entertainment. After a couple of drinks in the men’s room he was the first who would leave. After that he would work in his room writing his articles and reflecting on every conversation he had heard before.

While he attended Harvard College he met the gorgeous woman, Millicent Willson, who he married in 1903. The couple had five sons, but began to drift apart in the mid-1920s. She never really lived at Hearst’s Castle in San Simeon. She raised her children in New York in one of the other 40 mansions her husband owned. William met the actress Marion Davies after he returned to the west coast. She was an American film actress, producer, screenwriter, and philanthropist. The two of them began a romantic relationship and it lasted for the rest of his life. She used to live with him together in his castle. After he got sick he moved to her place in Beverly Hills and died there in 1951 at the age of 88. Lying on his death bed he was asked if he had finished building everything he planned and he replied that he had only finished 50% of what he was going to build.

Millicent’s house is nowadays booked for movies, e.g. Whitney Houston and Kevin Costner were filmed in this house for the movie ‘The Bodyguard’.