This weekend I am going to LA. Here are some good things to do, and what I am going to do. After the trip I will write what I thought about it.

What I thought about the places I went to:

We could borrow the car form the uncle of a friend of mine. With that car we went to all the places. First we went to Bel air and Beverly Hills and it was very beautiful. We went to the houses of the famous people and they were unbelievable, so pretty and enormous.

o we had a little photoshoot. 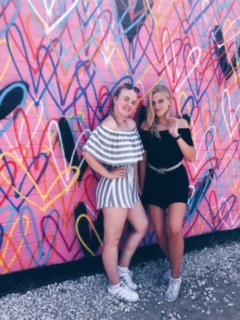 After the photoshoot we went to the Walk of Fame. It was very big and very crowded. I was looking for the star of David Hasselhof, because our last name is quite the same and it was an inside joke with the staff from the residence. We went to all the famous places on the Walk of Fame. For instance the Dolby Theatre and the Chinese Theatre. We didn’t really went in, but we saw it from the outside and inside until we couldn’t go further except when you got a tour. 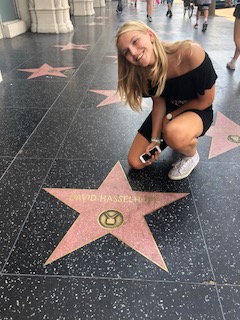 We drove over Rodeo Drive when we went to Melrose Avenue. I know Melrose Avenue because of its famous walls. There are a lot of coloured walls where you could take pretty photos, and of course we did that.

This is one example of a wall. This wall is saying GIRLS TOUR.

The sun was already going down when we drove to the Griffith Observatory. It was very busy because today the montly show was given. I fell asleep while trying to go up, but everytime we were send away. We went up for 3 times and then we decided to just go the next day and see it with daylight.

(next day to Griffith) We could just directly go up because there was no traffic. I already knew a lot of things that were displayed in the Observatory because I learned about it at school at home. Still it was very pretty and the view was beautiful.

(back in time again)

It was already dark when we arrived at the LACMA musea. We walked to the urban lights and I fell in love. I just looked at it for 5 minutes straight with not saying anything just observe the piece of art, but I wouldn’t be me if I didn’t take a picture of it. 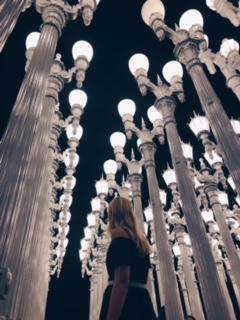 We were all very tired of the long day and we went to the house of the uncle. We saw the movie SING and after that we all went to sleep. I slept very well. I slept for 10 hours straight. It was so lovely because I haven’t done that since two weeks.

When we saw everything we went back to Goleta with the Uber and went straight to bed when we arrived.

The weekend was so much fun with my friends and the places where we have been to were stunning as well.