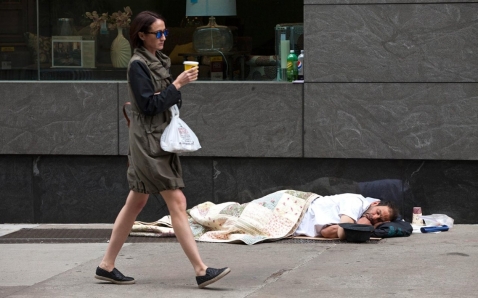 The second thing to understand about homelessness is the consequences of this situation. First of all, they can have many health problems such as illness, nutritional deficiencies, sleep deprivation, drug dependency, death and more. Homelessness causes also personal problems for example, less self-esteem, changes in behaviour, and increases in the chances of entering into the criminal system. Homeless people are not alone, sometimes with children. These will have consequences and it will start before the birth of the child, such as health problems, low immunity and emotional problems. They won’t have the chance to go to school, to learn and being cultivated. Their social or academic developments will be behind the expected level. The chances that they will leave the homelessness situation is low and very difficult. People who have been living in the street for a long time do not reach the age of 62, or not that often.

The last thing to understand is how you can help those people. They don’t deserve this. Nobody does, so we should help them. There are many things that you can do such as donate money or items to an association like “whamministries”. You can show your respect by saying hello or goodbye and you can be a volunteer  to your local homeless shelter. If you want to go further you can buy them some food or invite them to go eat with you ; they need moral support. It is also important to encourage people around you to hire homeless people so they can have salaries to get out of this horrible situation. In San Francisco, Atlanta and New York you can download an app to help directly the people by giving them blanket, gloves, coat.

In conclusion, we can notice that homelessness as I said is a very common situation in America and it continues to grow with the years. California is the state with the biggest amount of homeless people and people don’t pay attention. You have many solutions to help them; you would be happy if someone would do the same for you.

5 thoughts on “Homeless People in America”