She is one of the few people who won the EGOT – the Emmy, Grammy, Oscar and Tony Awards. Caryn Elaine Johnson, better known as Whoopi Goldberg, is one of the actresses who impressed the world with her acting skills. She portrayed many characters in different kind of movies, such as The Color Purple, Ghost, Sister Act. How did she start in film business?

Goldberg was born in 1955 in New York and was brought up by her single mother. Although she was considered as a shy person, she loved to entertain her family by imitating actors from the television. Due to her tough life in New York, she became a drug addict and was in rehab at the age of 17. After only one year she was released from rehab, married ,and pregnant with her only child. Later on she got divorced from her first husband and moved away with her daughter to San Francisco, CA.

On the West Coast, she started a career as a stand-up comedian and established her one-woman show called The Spook Show. The outstanding show included humor, satire and drama and she was asked to tour  through the United States and the Europe. Soon after, the show was adapted to a Broadway show and was renamed as Whoopi Goldberg. This was the turning point of Goldberg’s career. Although William Farley discovered Goldberg, Steven Spielberg contributed to and launched her career as a movie actress.  From then on, she has had several performances in movies, various shows and performances. 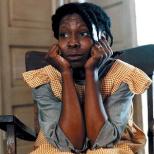 She is a hard-working and ardent person. Beside her stage career, she continued her studies. She holds Ph.D. in literature from New York University and she is an active human rights advocate. Even now, in March 2016, she started a new company with Maya Elisabeth called Whoopi and Maya, which is dealing with medical cannabis.

Their company is offering salves, balms and edibles. These are produced with high quality, infused with cannabis and sold at a fair price. The aim is to relieve menstrual pain and discomfort. The company is based in San Francisco and you can buy their products only in California. We have a store in Santa Barbara called Evergreen Compassionate Care which is selling their products.

Against all the struggles and difficulties which life brought her, Whoopi Goldberg climbed the ladder of success. She is not only a prosperous actress but also a smart entrepreneur. Seldom has an actor overcome her drug addiction and turned it into a business.  She reminds us that we have the strength to shape our own destiny. So, go for it!