I’ll talk about one of the most known festivals in the world. The name is San Fermin and it takes place in the North of Spain, in a city called Pamplona. It lasts one week,  every July from the 6th to the 14th inclusively. Every year thousands of people around the world go to the city to enjoy the big party. This festival has become known thanks to an american writer, his name is Ernest Heminway, who went to San Fermin and then wrote a book about it.

This festival begin the 6 of July at 12 am, when the mayor gives a short speech followed by the “Chupinazo” (a rocket). After that, the typical Spanish families are used to eat together, but the rest of the people start partying, dancing and drinking until 14 of July. During the day there are lost of events, so you won’t be bored. For example the bars are open until 6 am and also, there are music on the street. In the afternoon there are “corridas de toros” (bullfight) and when they finish, the people go thorugh the streets of Pamplona singing and dancing. 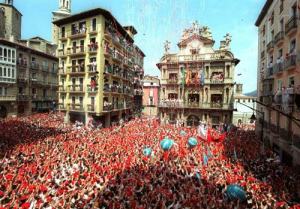 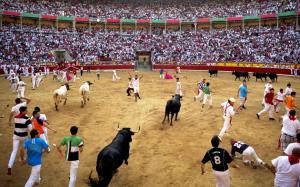 One of the most known event is the “encierro” (running of the bulls). The first one is on the 7th at 8 am, another rocket is thrown and 6 bulls start to run for 2 or 3 minutes across Pamplona streets being followed by houndreds of people. While this is happening, there are thousands of people watching this and waiting the bulls to arrive at the “Plaza de Toros” (bullring). Sometimes this becomes very dangerous and if there are drunk people running, they are likely to die. Of course, the police works very hard to try this not to happen; also, there are a double fencing so the animals can’t escape. This spectacle is televised in a nacional channel, but also, there are japanese, american, australian television…

Also you should know some things like: all the people wear white clothes with a red ( …… ); San Fermin is the patron saint of Navarra; the typical drink is wine, sangria and kalimotxo; there are also religion events taking place in churches; some of the foreigner don’t have a place to stay, so they sleep in parks; 14th of July is a very sad day for us, and we sing “Pobre de mi” at 12pm to end the festival. That day starts the count back until next year.