The Eurovision Song Contest (ESC) is an international competition in Europe. European nations must choose each year a singer, who represents their county. The best singer, who has the post points, wins the contest. He hosts the next contest in next year in May.

It all starts on the 24 March 1956 with seven nations. A very strict rule fo 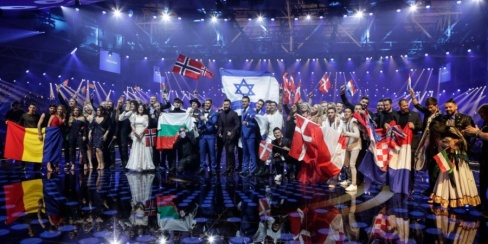 r participants was to sing in their country’s national language, but it relaxed with the year 1973. After that in 1999 the participants could sing in every language, which they want. Today it’s mostly in English.

In the contest, the participants have two options to get points. One the one hand, normal people can vote with televoting by telephone or SMS. On the other hand, there is a national jury, for each participant, which gives the other country’s points. The point’s Scala starts at 1 – 8, 10, and 12 points.

Since the 1990’s more and more countries join to the contest, so the organizer takes two sem 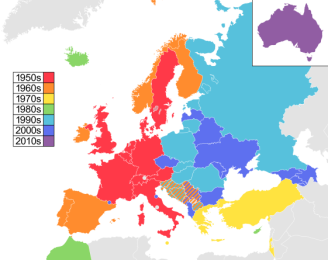 i-finals to find the Top 50. Only the “Big Five”: France, Germany, Italy, Spain and the United Kingdom are automatically in the Final.  The map shows, how many and in time the nations join to the contest by decade.

In 2015, the ESC celebrated 60 years anniversary. For the first time Australia joins to the contest and since that, it is very strong part in the contest.

The ESC is very important thing in Europe and in the European culture. Almost all nations of Europe join to one place, local or watching at the television.  Look and enjoy the next contest. On the 12th May, 2018, the Final is in Lisbon; don’t miss it or you can watch it next year 🙂

Take a look to the official site: https://eurovision.tv/