Volleyball is a game played by two teams, each one consisting of six players (indoor), in which the players use their hands and other body parts to get a ball over a net. The aim is to make the ball hit the ground within the opponents’ playing area. To prevent this, a player of the opposing team tries to reach the ball and play it towards a teammate before it touches the floor. The teammate then plays it back across the net or towards another teammate. This guy then has to play the ball over the net since a team is only allowed to have three touches before playing the ball back over the net.

Volleyball was invented in 1895 by William G. Morgan, physical director of the Young Men’s Christian Association (YMCA) in Holyoke, Massachusetts. It was designed as an indoor sport for men who found basketball too violent. The original rules were written by Morgan. The game soon proved to have wide appeal for both sexes in schools and many other people. Many countries then took the American game as a role model and introduced Volleyball in their country.

Volleyball can be played indoors or outdoors. The court and the rules differentiate a bit.

The game is played on a court 9 metres wide and 18 metres long. It is divided by a line into two equal areas, one for each team (6 players). Players may not step over the line during the game. There is another line 3 metres apart from the middle, which separates the front from the back area. Beyond this line back players are not allowed to kill the ball above the net, except they start jumping before crossing the line in the air. A net is placed across the court above the middle line. An antenna extends the net at the outer edge of each side.

The ball must be passed over the net entirely between the antennas. The service area to serve is marked behind each court’s end line. During a point each team is allowed to touch the ball 3 times before returning it to the other team. Blocking the ball or touching it while trying does not count as the first touch.

The game is played on a court 8 metres wide and 16 metres long. It is divided by a line into two equal areas. It is most common to play on the beach or on specially created places with sand to play on. Each team has 2 players and both are equally allowed to play the ball. This means that there are no area restrictions to either of them, except staying on their side of the net. Like indoor volleyball each team is allowed to touch the ball 3 times, but touching the ball during a block-action does count as the first touch. Also there are some restrictions on how to play the first and the third ball, for example, you are not allowed to play the first ball with an upper pass. The ball is also different in weight and shape. 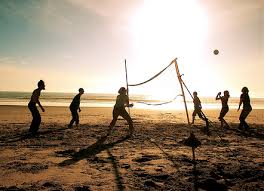 If you are thinking right now ‘rules and more rules…I cannot play volleyball’, do not worry, there is a place for everybody. If you just want to play with some friends, you do not need to pay too much attention to the rules. Most often people only use the rules for the court and the net, but do not look closely at mistakes when playing the ball. This is just the way to do it because it is pretty hard to learn how to play the ball correctly and not practical for “just for fun players”.

One thought on “Volleyball”