My name is Nicole and I’m from Switzerland. I’m 19 years old. I grew up in Zurich with my parents and an older sister and older brother. When I finished my school I went to Arosa for my apprenticeship as a waitress in a hotel. So for the last 4 years, I lived in Arosa and it became my home. 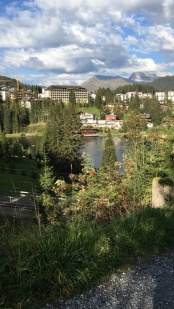 Arosa is in the southeast area of Switzerland in the canton Graubünden. You can only travel by car or train from Chur. Arosa has 3205 inhabitants. The high seasons are in summer and winter. In the spring and fall, only the inhabitants live there. They are two lakes in the center of Arosa called Obersee and Untersee. In the winter you can go skiing, walking a

nd ice-skating and in the summer hiking, swimming in Untersee and enjoy the sun.

The most beautiful and oldest building in Arosa is the Bergkirchli. It’s a church and they have an organ from 1762. In Bergkirchli we have concerts, marriages, funerals and on special days like Christmas, a religious mass.

My favorite place is by the lake Alplisee. It has a wonderful hiking tour for an hour. The trail is extremely precipitous, but when you are by the Alplisee

you can enjoy the fresh air and the sun. Also, you can go swimming, but it’s very cold, like 5 degrees.

In the summer we also have
a beautiful lake Untersee where you can go swimming, playing Volleyball or just relax with your friends.

In the winter it’s common to go skiing. Since 2014 we have about 225 km ski runways together with the Lenzerheide. I love the winter when it’s white everywhere. Also, a fun experience is to go sledding. That can be hilarious but also very dangerous. We have two big events in winter. One is the Humor-Festival that’s always in the beginning of the season and goes 10 days. There are 3 shows in one the day where comedians present their programs. Artists from

Switzerland, Germany, England and Austria come to Arosa and present their programs on 2000 meters in a very big tent.

The second event is called “Arosa Electronica”. It’s a music festival for the people who love electronic music. The Festival is always in the middle of March for a week. It has 11 locations for this event like in a skiing cottage, in a club or in a hotel.

Ice-hockey is the most famous sport in Arosa. We have two teams; one is playing in the first league and the second in the fourth league. In the past, the EHC Arosa was one of the best teams in Switzerland. They won 9 Swiss Championships in the years 1951-1957, 1980 and 1982.  The most famous player from the EHC Arosa was Guido Lindenmann. Now Guido has a bar in Arosa called “Overtime”. My best friend Alex and i go only to watch the games of the second team because my Uncle Bruno, my boyfriend Kevin, and Paul (Alex’s Boyfriend) a very good friend play there. Their team name is Wild Hogs.