On May 23, 2014, in Isla Vista, California, Elliot Rodger (the son of Peter Rodger, a Hollywood filmmaker) decided to take his revenge on life and on women. The police described this attack as “premeditated mass murder, spree-killing, murder-suicide, drive-by shooting, stabbing and vehicular assault”.

First, he stabbed three men to death in his apartment. He was in possession of two knives, a Glock 34 handgun, and two SIG Sauer P226 handguns. In the hours before the massacre, he posted on YouTube a video titled Retribution confession. Seated behind the wheel of his car, he filmed and explained, for nearly seven minutes, his hatred to the world.

He says, “You girls have never been attracted to me, I don’t know why […] I don’t know what you don’t see in me, I’m the perfect guy and yet you throw yourselves at all these obnoxious men instead of me, the supreme gentlemen. On the day of retribution, […] I will slaughter every single blonde slut I see. […] I’ll take great pleasure in slaughtering all of you. You will finally see that I am in truth the superior one, the true alpha male (laughing). After I’ve annihilated every single girl in the sorority house, I’ll take to the streets of Isla Vista and slay every single person I see there. All those popular kids who live such lives of hedonistic pleasures while I’ve had a rotten loneliness for all these years. […] Now I will be a god upon you. […] I hate all of you. Humanity is a disgusting wretched depraved species. If I had it in my power I would stop at nothing to reduce every single one of you to mountains of skulls and rivers of blood.”

After uploading the video, Rodger e-mailed a lengthy autobiographical manuscript to approximately a dozen acquaintances and family members. The document, which he titled “My Twisted World”, was made available on the Internet and became widely known as his “manifesto”. In it, he described his childhood, family conflicts, and frustration over not being able to find a girlfriend, his hatred of women, his contempt for racial minorities and interracial couples, and his plans for what he described as “retribution”.

Afterwards, he drove to a sorority house and shot three female students outside, killing two. He drove to a nearby deli and shot to death a male student who was inside. He began to speed through Isla Vista, shooting and wounding several pedestrians and striking several others with his car. Rodger exchanged gunfire with police twice during the attack, receiving a non-fatal gunshot to the hip. The rampage ended when his car crashed into a parked vehicle and came to a stop. The police found him dead in the car with a self-inflicted gunshot wound to the head.

All six murder victims were students at the University of California, Santa Barbara (UCSB). They were declared dead at the scenes of their attacks. Fourteen other people were injured; seven from gunshot wounds and seven by blunt trauma sustained when Rodger struck them with his vehicle. 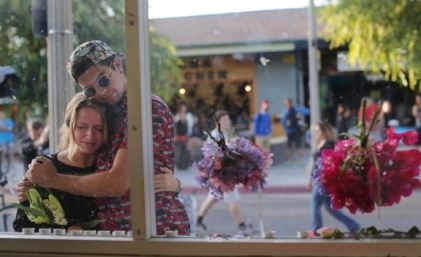 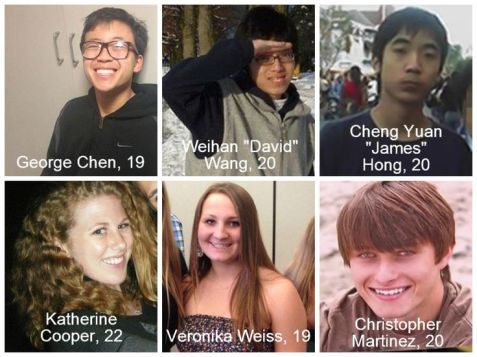