Currently in negotiations the Transatlantic Trade and Investment Partnership (TTIP) is a trade agreement with the aim to strengthen and boost the US economy and the member nations of the European Union. The supporters of the partnership are claiming that the trade agreement will result in the creation of millions of jobs for American and European citizens; furthermore, they assert it could have a positive impact on the economy of the EU and the USA. According to the European Commission, the partnership could boost the economy by at least 90 billion dollars just for the USA. However critics believe that big corporations will exclusively profit from the partnership and the positive effects on families and private households won’t compensate the disadvantages in sectors such as environmental protection, consumer protection and food safety acts. In addition, the negotiations between the USA and the EU are criticized for being undemocratic and for haggling behind closed doors without including the public in the decision making process.

The TTIP should be publicly discussed if it is morally defendable to support a trade agreement which could result in the expansion of an already immense wealth gap. According to the book Capital by Thomas Piketty the imbalance will result in a decreasing economic potential for both parties. Furthermore, TTIP strengthens social injustice and the exploitation of minorities and workers in the low-paid sector and the creation of a justice system independent from domestic laws for big companies who will then be able to sue countries via international arbitrations for a potential loss of profit due to domestic consumer protection laws or environmental protection laws.

To ensure that the interests of the US and EU economies as well as big corporations are represented in the negotiations, the leading US negotiators are mostly former lobbyists. For example, Michael Froman, trade representative for the USA and chief negotiator of TTIP, was paid four million dollars by his former employer to take on this task. Other examples are Islam Siddiqui who is a former lobbyist of Crop Life which is representing establishments like Bayer, BASF and Monsanto, or Robert Holleyman who has been an Apple and Microsoft lobbyist for over 20 years. But the EU is no better. Even though there are over 15,000 lobbyists working in Brussels, the negotiators of the EU still thought it would be necessary to have over 520 meetings with neoliberal-related lobbyists.

Perhaps the influence of the lobbyists isn’t a problem at all, because there is at least the potential that those companies involved won’t act selfishly or only focus on their own interests. Lobbyists for example possess an advanced knowledge about finances and management; these skills have been used by the Swiss government to budget the building of the world’s longest tunnel and to stick to the time schedule, which was a complete success. Additionally not all lobbyists are related to finance and business, some of them work for social organizations like the Human Rights Watch, the Freedom House or even the ICRC.

So what could be the other consequences of TTIP? Positive effects of TTIP would be the creation of a strong trade union, which could protect the members of this union from a potential global economic crisis. Other benefits are surely the reduction of beurocratism and the unnecessary costs of domestic customs for export and import. Furthermore, trade with foreign countries who ratified TTIP will be far easier than current conditions. In addition, TTIP will lead to the cultural exchange of goods.

The trading partnership will definitely have an impact on consumer protection, environment protection and worker’s rights. In those cases, the effects will be especially negative for the EU, due to the fact that they have stricter and more diverse laws and restrictions. One just needs to take a look at the list of prohibited chemical and biological substances; of the 1,300 forbidden substances in the EU, only 11 are forbidden in the USA. For example, asbestos (used in the shipbuilding and construction industry), which was clearly and without any doubt declared as a threat to health and a carcinogen, is still commonly used in plenty of goods in the USA. Furthermore, the USA has only ratified two out of eight ILO-norms (International Labor Organization) which would be forced labor and child labor in its worst forms. Obviously this doesn’t mean that the USA is one of the worst countries regarding workers rights, because countries like Syria have ratified all ILO-norms and Iran five of eight, and surely the people there don’t have more workers rights than the people in the USA. However, this kind of behavior illustrates a certain attitude towards the lack of protection of workers in the USA. For example 25 states in the USA have special Right-to-work-laws which restrict the funding of labor unions and worker councils. An example of this would be the Mercedes-Benz factory in Alabama which is the only factory of Mercedes worldwide without a committeeman.  In addition, there are countless further cases of egoistic and immoral behavior by international businesses. A great example would be the Canadian establishment, Gabriel Resources, which focuses on the mining of gold in Romania. Romania and Canada signed a trading partnership to protect the interests of companies and investors. However Gabriel Resources is currently suing the state of Romania for prohibiting the project due to the planned use of cyanide during mining, which is against the environmental laws of the EU, to which Romania is applying for a membership. Cyanide is also called a ticking bomb due to the fact that it is highly toxic and even deadly. Further examples for this controversy would be the lawsuit against Estonia for regulating its financial institutions or Uruguay for labeling cigarettes with health warnings. In general this wouldn’t be a problem if the case was held in front of a domestic judge, but those cases are fought in front of international arbitrators, whose lawyers and judges are often selected by the businesses themselves. In addition there is no inclusion of third-parties or witnesses if one of the partners doesn’t agree.

Considering all this information, the negotiation procedure has to be changed in order to include the public and to prevent secret unwritten agreements with the aim to loosen regulations in favor of big companies. Furthermore, the discussion about hard-won workers’ rights, as well as the preparation to introduce a parallel justice system for globalized companies, has to be put to an end to fulfill the aim of serving the citizens and providing them benefits through the TTIP deal. If they conform to the requirements, TTIP is more likely to make a positive change in our daily lives, improve the economy and to strengthen the USA and the EU, if they don’t protect the workers and citizens it will have disastrous impacts on our societies. 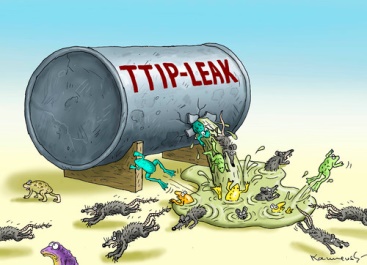 One thought on “Transatlantic Trade and Investment Partnership by Mattis Bieg, Germany”