Before I went to EF Santa Barbara I took a trip around the USA.

I left the 5th of July from Amsterdam to San Fransisco. We started our trip there. I went to America with my own family and another family. The first day, we did a bike tour but before we start the tour we stopped at the Hard Rock Café where we were watching the footballmatch of the WK from Belgium against Brasil. Belgium won the match 😉                 so after the match we did our tour. We were driving to the Golden Gate Bridge. After that we went to Sausolito. The second day, we visited Alcatraz, it is the old prison of San Fransisco. The prison was located on an island. The third day, we walked around the city. We also went to the Coit Tower where we had a nice view of the city.

After three days in San Francisco, we took the plane to Las Vegas. We slept in the Bellagio where we stayed two nights. We also went to a show of David Copperfield. We also walked on the strip. The strip is one of the biggest streets in Las Vegas where you have a lot of hotels and many casinos.

After two nights, we went to the airport to go rent a car. We rented a car for one week because we visited a lot of national parks. First we visited Bryce Canyon. Than we went to Lake Powell, one of my favorites. It was one of my favorites because we took a boat trip during the day between the canyons. We were swimming a lot and we did some wakeboarding ! One day later we were driving to Monument Valley, but before we went  there we visited Horseshoe Bend and Canyon X. Later we went to Monument Valley. There we went horseback riding. It was an epic experience! As the last national park we visited Grand Canyon. 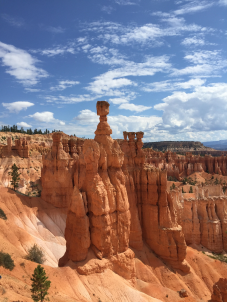 As the last part of our trip we went to Los Angeles. Our first three nights we slept in Venice Beach. Venice beach is the part of LA that I liked the most because you had a lot of variety, like beaches, the sea, a skateboard park, nice streets, … We also took a bike trip to Santa Monica and the Venice Canals. The last two nights I slept in Hollywood before my sister and I left for Santa Barbara.

This trip will always stay with me !