The first thing that you think about Las Vegas is the city of the million lights, the gambling capital of the world,  luxury hotels, show girls and having fun. It is a city full of glamour and extravagant individuals. The image created by films like “Hangover” or “What Happens in Vegas”  is definitely true!

But the city has two faces. There exists another side of that extreme-loving city, a side away from all that glitter, that is also true. What we don’t think or don’t want to think about is that an estimated  9,432 homeless people live in Las Vegas, 300-400 in makeshift homes of the colorlessness and darkness of the long flood tunnels. Do they choose this life or do they have no control?But why should any human being want a life of poverty, the cold, filth, loneliness and lack of comfort? 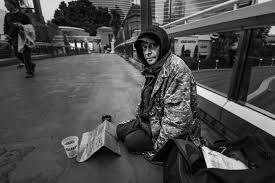 Most of them got into that situation because of drug abuse, unemployment and run ins with the law.  But the opinion of a lot of people working in charity organizations is that, if you want to get out of this dire situation, you can make it. There are a lot of organisations that try to give them a hand out of the tunnels into a new life. They try to give them shelter, medical help, social assistance…. in short, a second chance in life. So why don’t they want to change their situations?

Well, perhaps it takes too much effort or their self-confidence has shrunk to a minimum. Lots of them might have no perspective, no hope. Some of them also want to live that life to escape  from the social obligations. They want to live a life where they don’t have to wake up very early, go to work, behave like they have to behave to be a member of our society. They don’t want to have to fit into a pattern.

Some even say that they have some privacy, and strangely, a sense of security. Most of them also say that the live in the tunnel system isn’t as bad as they expected. People sometimes get so comfortable down there, that they even forget they’re living in a flood channel. They receive food stamps so they have enough to eat and they don’t have to pay a rent, which is very expensive in Las Vegas.

So is it  a self-built prison or a kind of freedom? People nowadays work so hard for a future in which they don’t have to work and can do whatever they want to do during the day…Can you compare that freedom? I don’t know! Our contribution to make those lives a bit brighter might be to make them feel more accepted and treat them in a respectful manner,not like a leper. Most people avert their view when they pass by a homeless person. Why do they do that? Why do you do that? Give them a smile! Make eye contact! Talk to them! It can be so easy!