My name is Kira. I’m from Germany. I have lived there since I was born for 19 years. I’m really into German food because it’s so delicious and multifunctional. So I think everyone should know something about our really good food.

A Pretzel is a type of baked bread product made from dough most commonly shaped into a twisted knot. It also has salt on it. Salt is an important part of the Pretzel because with salt it tastes way better than without.

Käsespätzle is my favori

te food here in Germany. Käsespätzle are a kind of soft egg noodle scalloped with cheese. You also put fried onions on it. This tastes so good!

For really good flavor you have to make the noodles by hand. It’s really easy.

“Sauerkraut is finely cut cabbage that has been fermented by various lactic acid bacteria. It has a long shelf life and a distinctive sour flavor, both of which result from the lactic acid that forms when the bacteria ferment the sugars in the cabbage.” This is the definition of Sauerkr

But I have to say that Sauerkraut isn’t really good food for everybody. To be honest I don’t really like it because I just don’t like the taste of it. But some people really love it. So you have to choose for yourself!

Weisswurst is typical Bavarian food. In the part of Germany where I live (Hessen), it’s not as common to eat Weisswurst like it is in Bavaria. But when I go to Munich (it’s the capital of Bavaria) I always e

at it because it’s soo good!

I would say Weisswurst is similar to the normal Bratwurst (sausage in English) because the form is the nearly the same, but it looks different. In the image below you can see how a sausage looks if you have never seen one before: 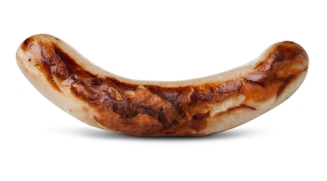 Weisswuerste are usually eaten as a mid-morning snack. They are made fresh every morning. It has a really mild taste. That’s why it’s also really popular for children.

The next one is “Fleischkäse”. You can also say “Leberkäse”. It consists of corned beef, pork and bacon a

nd is made by grinding the ingredients very finely and then baking it as a loaf in a bread pan until it has a crunchy brown crust. You can also eat it with bread. I always eat it like this at school. It’s way better!

Schnitzel is also a really typical food in Germany. Even though it’s originally from Austria (Wiener Schnitzel) it’s still popular in Germany. In every part of Germany!

German people often eat this with fries or with mashed potatoes. Some people ea 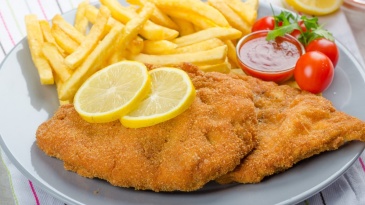 t Schnitzel without any dip. Some eat it with ketchup. It depends on your taste.

A “Schweinshaxe” is a roasted ham hock. “The ham hock is the end of the pig’s leg, just above the

ankle and below the meaty ham portion”.

It is especially popular in Bavaria! In my part of Germany it’s called “Eisbein”.
You can eat Schweinshaxe with “Knödel” or Sauerkraut.
Here you can see Knödel: