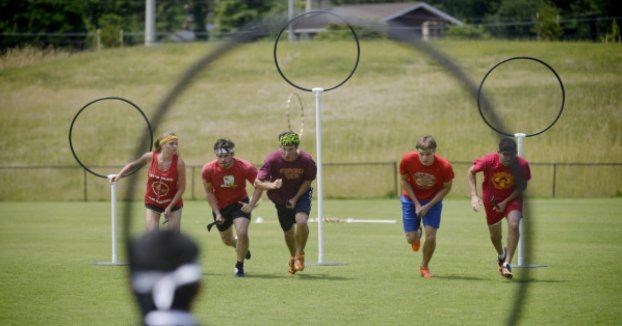 Do you know the movie, Harry Potter? Do you know the game of Quidditch? Yes, you can play this sport in the true life. Some explanations:  How do you play this sport? “To score points, chasers or keepers must get the quaffle, a slightly deflated volleyball, into one of three of the opposing hoops which scores the team 10 points. To impede the quaffle from advancing down the pitch, chasers and keepers are able to tackle opposing chasers and keepers at the same time as beaters using their bludgers—dodgeballs—to take out opposing players. Once a player is hit by an opposing bludger, that player must dismount their broom, drop any ball being held, and return to and touch their hoops before being allowed back into play. The game is ended once the snitch is caught by one of the seekers, awarding that team 30 points.”[https://en.wikipedia.org/wiki/Quidditch_(sport)]. Don’t believe you can fly on broomsticks! You have to run with it between your two legs. It’s difficult, but, with a little bit of exercise and training, it becomes easy. What equipment do you need to play this sport? Is it a physical sport? Quaffle (from volleyball), bludgers (from dodgeballs), snitch (from tennis ball), brooms, hoops. It is a physical sport because it is a mix between different sports: basketball,  volleyball and American football. Where is this sport from? Where was the first team in the world? Sure, this sport comes from the movie Harry Potter and the origin of this movie is British. So the first team to play to this sport were British people. The sport was created in 2005 at Middlebury College in Middlebury, Vermont (USA), by Xander Manshel and Alex Benepe, who later became the first commissioner of Quidditch. So, this sport is 12 years old. It is now an international sport, played around the world: in Europe, in the USA, Australia and China. Each year there is an international competition and this year it will happen in Oslo in Norway. About my experience? I have already played this sport when I was studying Dutch in Antwerp before to come in Santa Barbara. I played this sport with my host-family in one of the best clubs in Belgium: Dodo’s. I played it for only 4 months and a lot of people told me that I was really good at this sport. Now I’m going to Oslo inside the Belgium’s national team of quidditch to play a very big competition: international competition (I think). At the beginning, to run with a broomstick between my legs was really strange and really ridiculous, but everyone runs like this so I did the same. I felt better because I saw that everybody looked ridiculous to run like that but it didn’t cause any problems for anybody.