The two big earthquakes hit Kumamoto city of Kumamoto prefecture in Japan. First was April 14, magnitude 6.2 at 21:26 Japan standard time and next was April 16, it was main one and magnitude 7.0 at 01:25. It was midnight so everyone was sleeping when this big earthquake hit, as a result a lot of people were buried alive. There are residences for university student in Kumamoto and over 10 students were buried alive. A lot of students rescued each other but some people are still in destroyed residence. Least 49 people were died and injured about 3000 because of these earthquakes. Also more than 44000 people have been evacuated from their houses in Kumamoto.

Now big problem in areas affected by these earthquakes is that support materials are very shortage. Absolutely foods and water people the most need, almost houses were destroyed so they don’t have everything need for live such as blankets, paper, towels and diapers for child even houses. Now a lot of companies, volunteer organization and even individual people around Japan send many support materials on the other hand it is not enough. Some people waited 2 hours to get small rice ball. Everyone is on the line to get something with afraid for many earthquakes.

I was impressed by this picture. A woman is protecting her child into destroyed house of rubble. First when rescue team found this mother, they could not realize child into her arm because she wrapped her child in blanket and lied curled up for protect but after they helped mother and her child, mother was died but child was alive yet. One of rescue teammates found phone in this blanket with child. There is one message from mother “If you are still alive, please remember that how I loved you.” This message was read by everyone around there and impressed them. 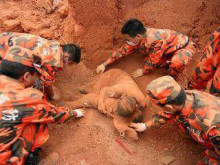 Disaster such as earthquake destroys houses, buildings, families and everything and a lot of people are dead. It is really sad and we cannot expect before this but after serious disaster, a lot of people around Japan help for them although it is not enough. I hope many people will be rescued and helped and there will be good condition as soon as possible.