Dystopia is a variant of science fiction. Unlike utopias, which take place on happy locations, in most cases, dystopias depict nightmarish worlds because literally ‘dystopia’ means ‘not-good place’. Authors, according to their centuries, describe the world they imagine for the future.
So, in what way is the writing of dystopias revealing the fears and worries present for the future world?

There is a the translation of the scientific progress in dystopias. Then, dystopias evoke the fear of lack of freedom and can talk about the fear of the technological advances.

In first part, we can talk about Brave New World, Aldous Huxley’s dystopia based on a scientific and eugenic society. In his novel, we understand that

basically all babies who are born are automatically placed in classes that define which statue they have in their society. For example, Alpha is the best one. They are programmed to be tall, beautiful, and clever. Then, Bêtas also formed an intelligent class. Gammas, Deltas and Epsilon are the middle and low classes.

The chapter 2 takes place in a hospital where the Director forms Bêtas. There is a loud speaker which makes a speech “Alpha children wear grey. They work much harder than we do, we are much better than the Gammas and Deltas”. These conditioning behaviors include the acceptance of social classes. By listening to these words when you are a child we will always remember who you are in the society.

Therefore, we noticed how social conditioning is violent. Moreover, in Huxley’s dystopia, babies are conditioned by electric shocks to learn hatred of beautiful things. This extract depicts a nightmarish world, controlled by the power of words, and the violence.

Suzanne Collins wrote The Hunger Games in 2008. In the beginning of the book, we discover a world separated by a fence in the 12th District. The first Chapter introduces Katniss, the main character, she lives in the 12th district and she likes hunting in the forest even if it’s forbidden. Panem, the 12th, is the poorest district. In the beginning, the location is described as somewhere “gray” and “dusty”. Panem is a place where the government had taken everything.

Moreover, people such as Katniss must obey to superior authority, in this case, the Capitol, the only one place that can be rich. To enforce the authority, a kind of military exists  : the Peacekeepers. But to maintain terror, the Hunger Games also exists . A game which aims to choose two people of each district and to make them fight until the death. So, people are always submissive and therefore without liberty. This world would be the nightmare of the totalitarianism. 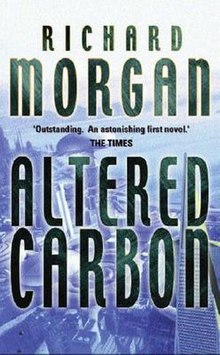 by transferring consciousnesses between bodies. It follows the attempt of Takeshi Kovacs, a soldier turned private investigator. But when Takeshi is resleeved, it’s not in his own body. In his novel, a rich man named Laurens Bancroft has, apparently, committed suicide. When he is resleeved and his destroyed stack restored, its 48-hours back-up schedule means he has no memories of the previous two days. Convinced he was murdered, Bancroft hires Takeshi Kovacs to investigate. He is forced to obey because the people who are called Meths, people like Bancroft, are wealthy and are among other things, able to acquire replacement bodies forever.

So, they are eternal while people are dying because they don’t have money to restore their stacks. Therefore, people are also hierachied and submissive to powerful people but also dominated by technology and become kinds of robots.

Dystopias translate the fears and worries present about our future world. The fear that science will become more important than human beings, that it categorized people and gives too much power to some people. We are afraid that perfection will become too important and threaten the uniqueness. Then, it also translates the fear of losing our liberty, the fear that the government will take us over. And finally we develop a fear of technological progress that could destroy our humanity and dominate the human world. In each case, everything seems irreversible. This may be a warning from the authors.

In my opinion, Dystopias are a good way to make people aware about the most likely future problems that hovers over the world. Then, it also permits the creation of a brief idea of what our world could be like in some centuries.